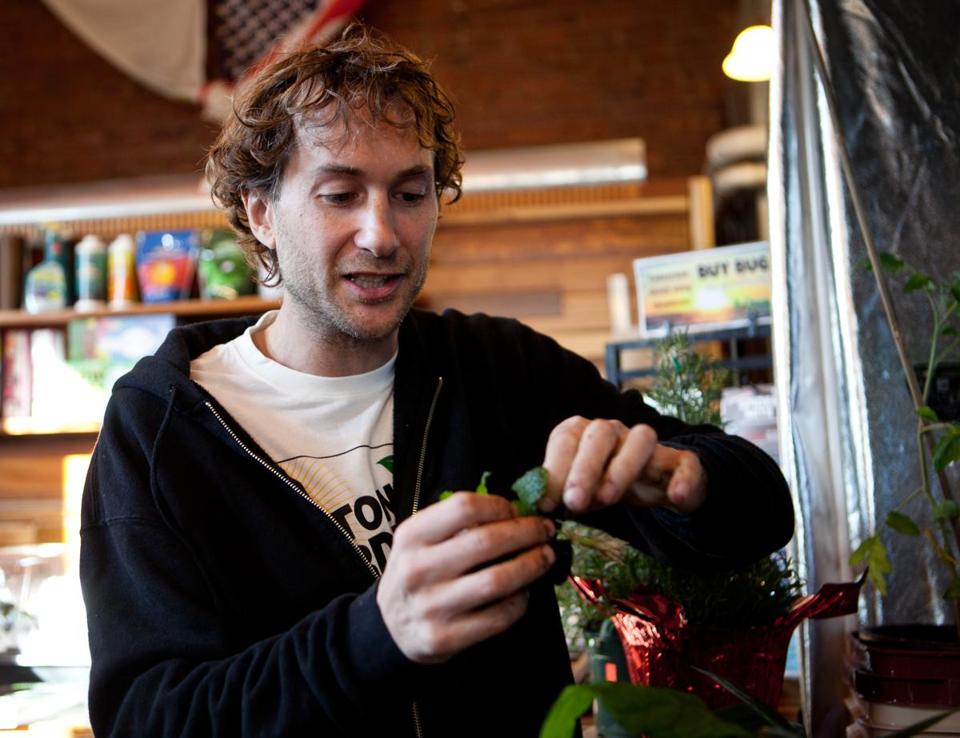 KAYANA SZYMCZAK FOR THE BOSTON GLOBE

Jon Napoli taught a “Grow Your Own Medical Marijuana” class at a Boston Gardener store on Dec. 15, 2012.

“Even if you’re a legal grower, you may want to be discreet about it,” advised Napoli, while attendees took notes on soil mixture, plant cloning, lighting options, and growth cycles.

Still, Napoli said, being discreet was different from being disingenuous — about the class or its goal. Pretense is no longer necessary.

With passage of Ballot Question 3 last November, Massachusetts became the 18th state (plus the District of Columbia) to legalize marijuana for medicinal purposes. Napoli no longer needs to be shy about advertising his pot-growing tutorials.

The Saturday classes have been booked to capacity — with six to eight students each — for the past several weeks, said Napoli, who also owns The Hempest, a chain of hemp-product stores with outposts in Boston, Cambridge, Northampton, and Burlington, Vt.

“Now you don’t have to say [hydroponics are] just for growing tomatoes,” he said. “There’s a lot of interest right now in growing cannabis. And I’ve always wanted to be a pioneer.”

Among those taking the class was Julia Dobbelaar of Winchester, who was diagnosed with cancer last spring. Dobbelaar has been using pot medicinally since her treatments began. Though she doubted she would be investing in her own growing system, due to her diminished energy levels, she said she has been open about her pot use — with caregivers and others — since it has helped her cope with side effects like nerve pain and weight loss.

Even as state health officials and law enforcement agencies wrestle with how to implement the new law — where to establish legal marijuana dispensaries, for instance, and how and to whom to issue permits for growing, procuring, and possessing pot — entrepreneurs like Napoli are seeing a new market and reacting accordingly.

He did not handle any marijuana plants during the class — that would indeed be illegal — opting to substitute spearmint and tomato plants instead. On display nearby, though, were guidebooks like “The Marijuana Grower’s Handbook.”

Three other New England states have passed similar medical marijuana laws: Maine, in 1999; Vermont, in 2004; and Rhode Island, in 2006. Possession limits for harvested cannabis or plants under cultivation vary from state to state. Massachusetts allows a 60-day supply for personal medical use. Meanwhile, the state’s public health department has until May 1 to draft regulations covering the law’s provisions, including who gets licensed to grow and sell the drug.

Until then, caregivers and patients may, under the law’s “hardship cultivation” section, begin growing their own marijuana, provided they have written permission from a doctor. Hardship includes limited access to a treatment center due to limited finances, physical incapacity, or living too far away from such a center.

With no such centers currently open, or likely to be for many months, a doctor’s letter “shall constitute a limited cultivation registration,” according to the law.

For those legally cleared to grow pot, cultivation and storage is restricted to an enclosed, locked facility. According to Matt Simon, legislative analyst for the Marijuana Policy Project in Washington, D.C., a prolegalization lobbying organization, roughly 1 million patients in 14 states are already cultivating their own weed legally.

Once Maine and Rhode Island passed some form of legalization, Napoli figured there were enough fledgling growers in the area to start offering classes.

These classes include instruction in how to take clippings to clone healthier, more productive plants; how to grow using different methods, organic or hydroponic; and the differences between growing indoors and out. An indoor setup, he told attendees, ideally has two rooms or growing areas, one for starting plants, the other to nurture them to harvest stage.

Depending on what kind of growing lights are used, the total cost of a system is about $1,000, said Napoli, although a basic set-up for starting plants can cost around $200. After that initial investment, and assuming next-generation plants are cloned and not grown from new seed, ongoing costs are minimal, he said.

Class attendee Peter Greene of Jamaica Plain said that he had grown marijuana in college years ago, and that now there seemed to be “a big industry waiting to happen.”

“I’m getting acquainted with the new technology,” Greene offered. “But I haven’t bought any equipment yet.”

Like Napoli, Bill Ovoian looks to capitalize on a greener future in Massachusetts. A former IT director, Ovoian has started a service business, Discreet Growing, which, for a fee, will set up and manage a home hydroponic system.

The cost is determined by the size and complexity of the system, several of which he has already installed. His website offers a “complete organic grow system” — sufficient to produce six mature plants — for $1,195, delivery and setup included. Adding a 4-foot-by-8-foot growing tent with exhaust fan and filter runs another $950.

An experienced home brewer and home wine maker, Ovoian got into his new line of work after helping supply pot to an elderly cancer patient he knew.

“I’m the hydroponic store on wheels,” said Ovoian, who likens his service to pet-sitting. He hopes to work with the state health department and intends to get a growing license once they are issued. His target audience, he said, is both caregivers helping those with medical marijuana needs and older, more affluent individuals who have a legal reason to use pot.

“I’m all for keeping it away from kids,” he said.

Boston Gardener is not the only gardening supply store in the area offering classes in hydroponic growing. GYOstuff, a supply shop in North Cambridge, conducts such classes, too, and they are typically filled days in advance, owner Eli Constantinou said.

In contrast to Napoli, however, Constantinou has been far more guarded about what his growing equipment might be used for. He advertises his classes, but not in the upfront way Napoli has been doing.

“People come in here to grow tomatoes and peppers — seriously,” he said at his shop recently.