When Ean Seeb and his business partners founded Denver Relief, their medical marijuana dispensary in downtown Denver’s Baker neighborhood in 2008, it was strictly a bare-bones effort. No fancy interior decor, no proprietary strains or products, no state-of-the-art grow house. Their inventory at the time was as limited as their personal bank accounts.

After all, as a cannabis business they did not have access to traditional bank loans and had to literally bootstrap their way up the hard way, borrowing seed money from friends, family and employees and building out the operation one step at a time.

“Denver Relief started with $4,000 and a half pound of pot,” Seeb jokes now, referring to the business’s meager beginnings, but it has since grown into a mini marijuana empire that’s one of the best known and most established of its kind in Colorado. In addition to its 1,500-square-foot dispensary, Denver Relief now offers cannabis business consulting services and wellness treatments and it operates its own cultivation facility.

None of this came cheap – building out the retail operation was a six-figure project, Seeb says, and setting up their 13,000-square-foot hydroponic cultivation facility cost them more than $500,000 – and funding has always been a challenge. Marijuana is still illegal under federal law, despite the fact that it is now legal for adult “recreational” use in Colorado and Washington State and for medicinal use in 14 additional states. Most banks remain unwilling to do any sort of business with cannabis operators due to federal regulations such as the Bank Secrecy Act, which requires financial institutions to report potential criminal activity to the government. That means no small business loans, no revolving credit lines and no credit card transaction services. Some operators have even had trouble getting access to a basic business checking account.

[Related Video: Watch Denver Relief owner Ean Seeb talk about the challenges of doing business in an unsure regulatory climate by clicking on the tiles below.]

But that could all soon be changing.

Denver Relief is currently in the process of setting up a $10 million investment fund that will allow interested backers to invest directly in the cultivation and operational side of the industry, as well as in ancillary businesses (grow equipment, lighting solutions, etc.). On track to launch by May of this year, the fund will offer debt-side investments starting at $100,000. (As of now, the state of Colorado requires that equity investors in the state’s marijuana businesses be Colorado residents; no such regulation applies to debt investments.)

Most notably, however, this fund could become a lifeline for startup operators and growers, bringing seed capital and true business financing to the cannabis industry for the first time.

“We’ll see how it goes,” Seeb says, “but we are absolutely working with very successful individuals who have proven successes in the past and have come to us because of our expertise in the industry… It’s been very nice that people want to come and work with us and they’re starting to recognize the work that we’ve done over the last several years.”

Denver Relief won’t be the first cannabis-focused investment fund on the market – Yahoo! Finance profiled two of the primary competitors in this space, Privateer Holdings and The ArcView Group, in January – but by offering funding to cash-strapped operators and grow houses, it could well carve out a unique niche for itself in this fledgling industry.

“If you’re looking to be involved in this industry, there’s an opportunity through us and we can help with that,” Seeb says. 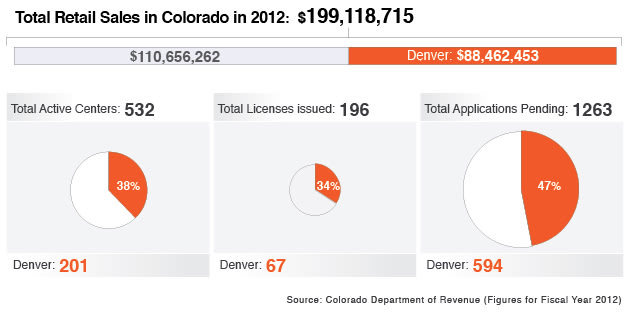 It’s a needed service — and everyone agrees that the upside for investors is potentially huge — but backing marijuana operators comes with more than a little bit of risk, according to investment adviser Robert Kane, president of Cannabis Consulting Inc. in Colorado Springs.

“There is a perversion of the risk-reward ratio when it comes to investing on the buy-sell-grow side of this industry” he says. “Say you want to lend Donald Trump money to open a new casino. You’d probably get a double-digit return on that based on the risk that you’re taking. It’s the same with cannabis, but there’s also the challenges of the legal landscape, the potential of billion-dollar competition coming into the market, and this is all in addition to any tax risk and the general business risks.”

It’s not that cannabis grow facilities and dispensaries are a bad investment, Kane says, but that the return isn’t yet rich enough to make up for the significant risks that remain in the market.

Brendan Kennedy, with cannabis-focused private equity firm Privateer Holdings agrees and says that there are still plenty of opportunities to make money in ancillary businesses without having to deal with all the legal hurdles of actually growing and distributing the product. “As a private equity firm or venture capital fund, making these types of investments [in grow operations] is very difficult because it creates a conflict in terms of fiduciary duties,” Kennedy says. “It’s really a problem of duty of care and duty of good faith, and you could probably argue that there’s a violation of the duty of loyalty as well, which are three big challenges for a private equity firm.”

There are contractual challenges as well, due to the hazy legal situation surrounding the cannabis industry.

“So if someone were to write a contract with a grower and the investment was for 50% of the company in exchange for $1 million, the court could deem that an illegal contract,” Kennedy says. “Because contracts for illegal purposes are unenforceable. I couldn’t contract with you to commit a crime and then, if you didn’t commit the crime, I couldn’t go and sue you in court.”

Still, Seeb is upbeat about the industry’s future and the potential for his new fund.

“This is the new industry,” he says, “and those that are smart enough recognize that the risk is fairly low to being involved and the reward is so great. I think we’ll see that value and we’ll ideally start throwing money at these investments. They are good investments; we’ve proven it.”